Basel, AD 1300 - The cloister of the Barfüsserkloster (Franciscan friary) 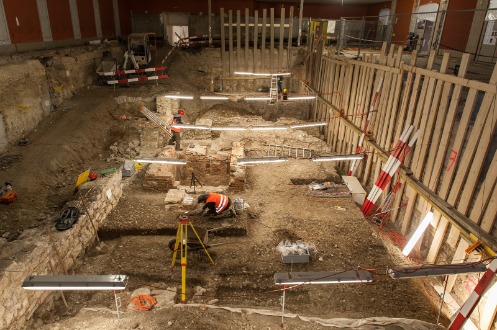 Why are we excavating?

The planned extension and renovation of the Stadtcasino has prompted extensive rescue excavations, which will be carried out over the next 12 months. The excavations commenced on 18th October in the music hall, where they will reach a depth of 7 metres below the former parquet flooring.
The location of the Stadtcasino is extremely interesting from the point of view of the city’s history. The development and expansion of the city over several centuries can be traced here.

What do we expect to find?

The Barfüsserkirche church and the Barfüsserplatz square are located today in the centre of Grossbasel (the area of Basel on the left bank of the River Rhine). Up until the mid-13th century, the area was still situated on the edge of the city. Nevertheless, it was intensively used:
The 10th century settlement has so far only been identified by means of ceramic finds and hearths. The Burkhard city wall ran through the area and the first church was built here at the end of the 11th century. The Stadtcasino grounds, however, were still outside the fortification at that time. Construction of the inner city wall in the early 13th century led to the first expansion of Basel, which enclosed the area within the new ring wall.
Around AD 1250 the Franciscans built the first friary. Some 50 years later, this edifice was replaced by a new building, of which the Barfüsserkirche church still stands today. The cloister and associated friary buildings were located in the area of the present-day Stadtcasino. Several phases of alteration and reuse followed after the Reformation period until the 19th century (e.g. hospital). In 1844, the former friary buildings were finally replaced by a department store and the music hall of the Stadtcasino was built in 1875.

How long will the excavations take?

The excavations are set to continue until the end of October 2017. Unfortunately, there aren't guided tours any more.

The excavation uncovered the remains of the south and west wing of the cloister and a section of the cloister-garth of the Barfüsserkloster (Franciscan Friary).

The view from the monastery courtyard shows the cloister, which was directly adjacent to the Barfüsserkirche church, with its intricate tracery windows. Undated Lithograph by R. Rey, 19th century.
Picture: StABS BILD 6, 1137.

A piece of the exposed floor of the cloister: the mortar bed beneath the clay slabs was well-preserved as was the plastered back wall with its window opening to the cellar. The foundations of a pillar of the colonnade of the 1844 department store can be seen on left edge of the picture.

Cellar of the friary.

Fondations of the monastery courtyard and the cellar.

The privy, which this latrine shaft was part of, was located in the southwestern corner of the cloister garden. Whilst medieval and early postmedieval latrines were often simply covered over when they were full, this one was probably cleared out on a regular basis.

The cemetery in the cloister garden

Since October 2016 more than 260 skeletons have been uncovered in the cloister garden of the former Franciscan friary. From infants to the elderly, all age groups are present.
From 1528 onwards, the cloister and garth became part of the newly founded “lunatic asylum” or almshouse. Anatomical interventions – six skulls with boreholes (trepanations) and one with an incision – show that inmates from the almshouse were also buried there. A gold coin, together with the trepanations and the dress accessories from other graves, provides valuable indications that the burials in the cloister garden date to the time after the Reformation.

Several mass graves may have held the victims of epidemics (plague?).

The skeletons are documented by the anthropologist.

Several adult skeletons were found lying in a disorderly cluster beside and on top of one another in the area of the former cloister. One of the skulls clearly bears a trepanation.

In 1843 the monastic buildings were demolished and replaced by a department store. Despite its name, the so-called department store, built in 1844 beside the Barfüsserkirche church, did not serve as a market for the general public but as a place for the wholesale of goods and where customs and excise duty was paid.

The inner courtyard of the department store offered a lot of space for horse-drawn carts. The administration building with its colonnade of pillars can be seen to the right. The front of the building faced on to Steinenberg.
Photograph: StABS, AL 45, 2-90-2.

The first features were found only half a metre beneath the concert hall floor: the courtyard wall of the department store’s administration building and the pad foundations of its pillar colonnade.

Cellar of the department store.

Five meters below the parquet of the music hall a baptismal font weighing 600 kg emerged. It had been re-used as a water collector in a floor inside the cellar of the department store erected in 1844.

The 16-gonal basin is made of fine-grained red sandstone and has a diameter of 97 cm. It may have been the baptismal font of the Barfüsserkirche during the post-Reformation period or of a church in the vicinity of the monastery.

Archaeological finds from the excavation

You can visit us on: