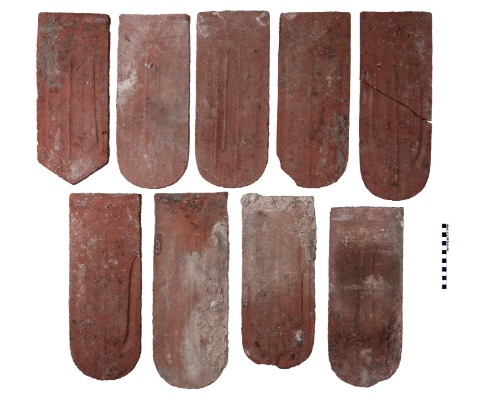 After the “lunatic asylum” was transferred to where the university hospital is located today, the former monastic buildings had to make way for the construction of the so-called department store in 1843. The friary was dismantled and any reusable materials were sold. However, a cache of roof tiles were left behind on site. Their so-called head lugs, small projections on the back of the tiles which allowed them to be fixed to the batten, had been knocked off so that they could be used to cover a courtyard wall.

Information on the excavation that is taking place in the cloister of the Barfüsserkloster:
www.archaeologie.bs.ch/stadtcasino_en

Remains of a courtyard wall in the utility area of the friary. It was originally covered by the tiles that are now stacked up in front of it.

StABS JJ 33 Riggenbach Report on the preliminary work in advance of the construction of the new department store, dated 25th Sept.-31st Oct. 1843:
“The day labourers spent all week […] dismantling the floors in the almshouse office, the rectory and the almshouse itself, all of which were covered with burnt clay tiles. The tiles were removed and stored in a safe place. By doing so, 2800 roof tiles and 3000 floor tiles of very good quality were recovered this week.”