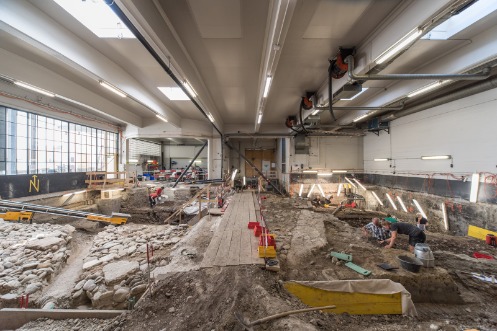 The Archaeological Service has been running a very unusual excavation project in the Spiegelhof area since January 2018.

Why are we excavating?

The alteration work carried out on the Spiegelhof building has made it necessary to undertake extensive rescue excavations over the coming months. Archaeological layers of up to 1,5 m in thickness dating back to the Roman period lie beneath the building and will be destroyed when the indoor carpark is extended further below ground.

What do we expect to find?

When the Spiegelhof building was constructed between 1937 and 1939, numerous houses in the Petersberg area had to make way. This meant that a neighbourhood was lost from the historical city centre, which had up to then retained its late medieval architecture with closely set buildings and narrow, winding laneways.

When the construction pit was excavated, the ground-plans of wooden houses almost 1000 years old came to light, which had been excellently preserved thanks to wetland conditions otherwise rarely found in Basel. The features were unique in Basel and in Switzerland in general and were largely without compare even within a European context. As attested to by numerous leather fragments, they had been part of an early craftsmen’s quarter in the medieval city, where shoemakers had been active probably from as far back as the 10th century. The quarter was located within the city wall built around 1080 by Bishop Burkhard. Late Roman layers of up to one metre in thickness were found underlying the medieval timber buildings.

During the current alteration work, the Archaeological Service expects to uncover further remains of medieval houses and well-preserved finds made of organic materials such as wood, textiles or leather. Thanks to scientific methods such as archaeobiology and dendrochronology, which involves dating construction timbers by means of their tree rings, important findings can be made with regard to the environmental and climate history of the area. This in turn will give us a fascinating insight into the living conditions that existed in Basel during Late Antiquity and the Middle Ages.

How long will we excavate?

The excavations will probably continue until the end of 2018.

When the new police administrative building was being constructed, the remains of ancient wooden buildings were unexpectedly found. Two rescue excavations were mounted between 1937 and 1939 to archaeologically examine the remains.

The Petersberg area is situated in a spring horizon which keeps the ground permanently waterlogged. This creates ideal conditions for the preservation of organic materials such as wood, since they show hardly any signs of decay due to the lack of oxygen.

View of the Spiegelhof area between 1937 and 1939.
Photograph: Denkmalpflege Basel-Stadt, Foto Wehrli, 1938.

The Petersberg area is situated in a spring horizon which keeps the ground permanently waterlogged. The floors and the lowermost layers of beams have survived.
Photograph: SGUF A 931.

More than 1000 leather fragments were recovered during the excavations that were carried out between 1937 and 1939. They mainly included remnants of shoes as well as cut-offs and leather waste from the manufacture of shoes.

Construction of the Spiegelhof building created a water barrier, which resulted in the ground drying out more and more. As a consequence, the organic remains of the settlement decayed faster.

However, a water-logged channel was uncovered in one of the lowerlying layers and this will probably allow us to determine the exact felling dates for the timbers.

As can be seen from this small rough clay figurine of a toy knight, the buildings in the Petersberg area were not just workshops but also served as a residential area for the craftsmen and their families.

The soil from around one of the hearths was placed in a wet-sieving plant made up of several sieves with different mesh sizes.

The fish remnants found contained mainly indigenous species such as salmon, trout and eel. Herring, however, were also part of the diet. Salted or smoked, these saltwater fish were imported in wooden barrels from the north, probably from the High Middle Ages onwards. Drawing: Medieval fish market scene. Chronicle of the Council of Constance 1414–1418.

When the tavern where members of the Basel upper class had met since the 13th century had to make way for the construction of the Spiegelhof building in 1939, very little remained of its former glory. At that time few of the lowerincome households would have had access to their own bathroom and the building served as a public bathhouse.

The current excavation uncovered the foundations of the medieval zum Brunnen House.

The current excavation uncovered the foundations of medieval houses of the Petersberg area.

At that time few of the lowerincome households would have had access to their own bathroom and the zum Brunnen House served as a public bathhouse.
Photograph: StABS NEG 04953.

View from the fish market towards St. Peter’s Church and the Petersberg area (right). The zum Brunnen House with its stair tower is to the right of the photograph. Photograph: Basel Department of Historical Monument Protection.

The springs in the Petersberg area kept the soil permanently wet, forcing the residents to build drainage channels running along the foundations of their houses. However, the springs were also tapped for fresh water, e.g. by means of lead pipes encased in clay tiles.

This medieval comb was not only used to brush hair but also to remove lice and nits.